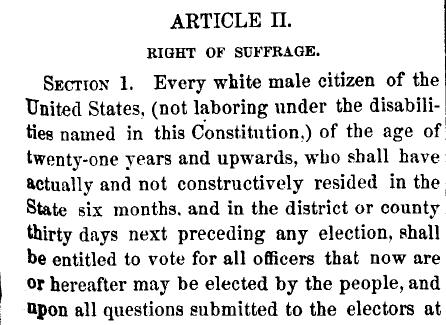 Assemblyman Curtis J. Hillyer delivers floor speech in favor of women voting. The resolution to amend the Nevada Constitution to allow women to vote (a.k.a. “suffrage resolution”) passes both houses of the Nevada Legislature.

Battle Mountain is the site of Nevada’s first suffrage convention.

The Assembly formally invites Laura DeForce Gordon to speak to the members about suffrage, but later rescinds the invitation. Instead, she is allowed to the use the Assembly Chambers, at a time when the members are not in session, to address any topic of her choice.

The Legislature fails, by a narrow margin, to approve the resolution from the 1869 session.

On January 10, Assemblyman Oscar Grey (Speaker Pro Tem) attempts to process his resolution to allow for woman suffrage. After some debate, it is indefinitely postponed, 31 to 17.

A joint legislative committee recommends that the Constitution be amended to allow women to vote, saying “there is today no sufficient reason why the rights and responsibilities of the ballot should be longer withheld from the women of the land.” The Assembly and Senate, in two separate votes, fail to approve a suffrage resolution.

A suffrage resolution passes the Assembly, but fails in the Senate.

A suffrage resolution passes both houses.

The Legislature fails to approve the 1885 resolution.

The Legislature passes a separate resolution to amend the Nevada Constitution to allow women to be elected as School Superintendents and school trustees.

The 1887 school office resolution is passed by the Legislature and by the all-male electorate at a special election. Women may run, but are not allowed to vote, for these positions.

At least six women are elected to school trustee positions around the state.

The Legislature passes an Act allowing women to be attorneys and counselors in law. Laura May Tilden, of Virginia City, helped gain this legislation and was Nevada’s first female attorney.

The Lucy Stone Nonpartisan Equal Suffrage League, with Fannie Weller as President, is formed in Austin.

Rev. Mila Tupper Maynard speaks to the Nevada Assembly in support of suffrage.

The Legislature passes a suffrage resolution.

At least a dozen women are elected to school trustee positions around the state.

Two women in Austin demand, and are allowed, to vote in the school election.

Local suffrage organizations are formed in places such as Pioche, Panaca, Delamar, and Ely.

Susan B. Anthony and Carrie Chapman Catt speak in Reno.

Frances Williamson speaks to Nevada Senate in support of suffrage.

The 1895 suffrage resolution passes the Senate and fails by one vote in the Assembly.

The Nevada Citizen, a suffrage newspaper, is launched in Reno.

By this year, the Legislature has changed state law to specify that school superintendent offices are filled ex officio by other county officers, none of which may legally be held by a woman. As a result, women are no longer elected to county school superintendent, but may continue to run for the office of school trustee.

Attorney General Richard C. Stoddard confirms that women are not legally eligible to be appointed to serve as Deputy State Superintendent of Public Instruction.

The Legislature abolishes the office of County School Superintendent.

The Legislature approves Assembly Concurrent Resolution No. 3 to amend the Nevada Constitution to allow women to be elected/appointed as school superintendents and appointed as notaries public.

The Nevada Equal Franchise Society is organized with Margaret Stanislawsky as President.
At least 27 women have been elected as clerks of their school boards around the state.

The Legislature approves the 1909 resolution to amend the Constitution regarding women as school superintendents and notaries.

Carson City native and attorney, Felice Cohn, drafts a separate resolution for consideration by the Legislature to amend the Nevada Constitution to allow women to vote. It is passed by both houses.

Sixteen county-based chapters, the first of which is in Lyon County, are organized. Tonopah organized an Equal Franchise Society.

All-male electorate votes to amend Constitution to allow women to be appointed as notaries public and elected/appointed as School Superintendents.

The Nevada Equal Franchise Society collects pledges from legislative candidates to support the suffrage resolution and campaigns for those candidates.

At the 1912 election, women position themselves near polling places around the state to remind the male voters to choose legislative candidates who have pledged to support suffrage.

The Legislature approves the 1911 resolution to allow women to vote, and the question is sent to the voters.

Governor Tasker L. Oddie speaks for the franchise for women in his January 20, 1913 State of the State Message.

The Nevada Equal Franchise Society orchestrates a vigorous pro-suffrage campaign across the state, relying heavily on volunteers within Nevada’s communities.

Nevada Men’s Suffrage League is organized as a counterpoint to the anti-suffrage Men’s Business League.

George Wingfield speaks out against suffrage and is subsequently ridiculed by newspapers across the state.

An anti-suffrage group, the Nevada Association of Women Opposed to Equal Suffrage, is organized in Reno with Emma Adams, wife of former Nevada Governor Jewett Adams, as President.

The all-male electorate approves the constitutional amendment to allow women to vote. It passes in 12 of the 16 counties. Opposed were Eureka, Ormsby, Storey, and Washoe Counties.

Anne Martin writes “The Winning of Nevada” for the November 7, 1914 Suffragist. This article tells about the organization and education of Nevadans by the Nevada Equal Franchise Society.

Nevada women vote for the first time in city elections.

Janet Dory is appointed, and subsequently re-elected, to the Lander County Commission.

Nellie is the widow of McKaskia S. Bonnifield, the organizer of the 1870 Battle Mountain suffrage convention. Justice Bonnifield passed away in 1913. Minnie’s grandfather is Senator Henry Comins, the champion of suffrage in the 1895 legislative session. Ironically, her father, Assemblyman Daniel McDonald, led the opposition.

Reno women divide into two competing groups, the Women’s Civic League, led by Anne Martin, and the Reno Woman Citizens Club, which became, under the direction of Sadie Hurst, the League of Women Voters.

Nevada women vote for the first time in county and statewide elections.

Female candidates are on ballots across the state. Elected to the office of County Recorder are Jennie Curieux (D-Nye), Rita Millar (D-Mineral), and Jennie Wilcox (D-Lincoln).

First Nevada woman elected to a statewide office is Edna Baker of Sparks who joins the Board of Regents, the members of which are elected statewide until 1958 when districts are created.

First Nevada woman elected to the Legislature is Sadie Hurst (R) of Reno.

Special session of Nevada Legislature ratifies amendment to U.S. Constitution to allow all U.S. women to vote. Assemblywoman Hurst presides over the Assembly and is present when Governor Emmet Boyle signs the legislation.

Governor Boyle’s speech to the Senate and Assembly when he calls them into Special Session.

*This timeline will be updated as information becomes available.