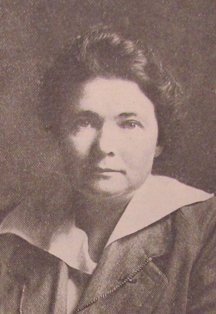 Anne Henrietta Martin was born in Empire City. Her father was a member of the Nevada State Senate 1875-1879. He was involved in a mercantile store in Empire City, but moved the family to San Francisco in 1880 when the town declined. They returned to Reno in 1883 and built a house at the corner of Mill and Lake Streets. He became president of the Washoe County Bank, the Reno Water Company, and the Reno Flour Mills.

Taking a leave of absence, Anne spent ten years studying and travelling. She became involved in the suffragist struggle in England and was arrested for “disturbing the peace” during her stay. In 1912 Anne returned to Nevada and was elected president of the Nevada Equal Franchise Society. Their intensive campaign under Anne’s outstanding leadership paid dividends. Between 1912 and 1914, Anne made speaking tours through every Nevada county and continued to head the women’s organization which secured the necessary second passage of the State Constitution Suffrage Amendment in 1913. This successful campaign was triumphant, winning the hard fought victory for women’s suffrage which passed by popular vote in Nevada on November 3, 1914. Anne also played a key role in speeding up the passage of the 19th Amendment to the U.S. Constitution, which guaranteed the right of suffrage to women in America.

Anne was an unsuccessful independent candidate for the U.S .Senate from Nevada in 1918 and 1920. She and her mother sold the house in Reno in 1921 and moved to Carmel, California. In 1945 Miss Martin was awarded an honorary degree as Doctor of Laws by the University of Nevada. In her later years, Anne spent much of her time in Reno, living at the Golden Hotel and using the Washoe County Library for research. She died in 1951 in Carmel, California.

Read More about Anne Henrietta Martin on the NWHP website.